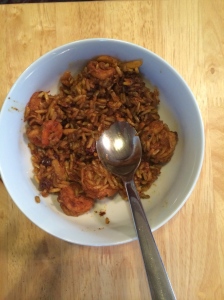 Simply Asia makes an Indian Essentials Spice Packet called: Chicken Biryani.  Being a big fan of Biryani, often eaten at our local India restuarant I was up to the challenge of testing a quick and easy way to make Biryani vs a more complicated recipe that involved no short-cuts.  (The long method will be posted later this week and was also equally successful).  The dish was easy to make.  The skillet did take a little effort to clean but overall clean up is reasonable for the quality of the dish.   We had zero left-overs for three people, one of who is under 5 and one of whom is a hungry man.  So I suggest doubling the recipe if your crowd is large or if you want any leftovers.  The serving amount on the packet notes 6.  Given we had no sides, our portions were on the larger size.

This dish looks and tastes great.  The dish does have some nice, yet mild heat.  The spices noted in the packet are chili peppers, turmeric, red pepper paprika, and salt.  The packet also lists sugar but that was not detectable  and the packet itself only lists 15 calories so it cannot be too much.  Sodium is listed as 440mg (18% of daily value) which is not too bad for a prepared packet like this.

1 cup of white basmati rice (I used brown which did complicate the recipe some given a longer cooking time) – Read directions carefully before starting recipe if using brown rice.  Otherwise you will waste time waiting for your rice! 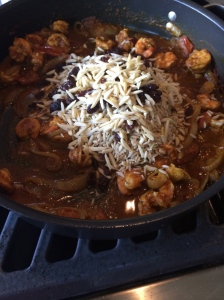